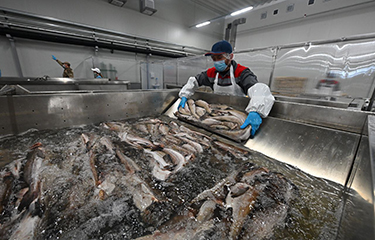 
The Russian government is expanding foreign investment restrictions in its seafood industry by amending existing legislation.

The Russian government has already restricted the scale of foreign investment in certain seafood industries and is now planning to expand those restrictions. As global tensions escalated due to Russia’s invasion of Ukraine, Russia has tightened controls by listing its seafood industry as critical to the country’s food security.

In late September, the State Duma, the lower house of Russia’s parliament, passed changes to existing legislation that set rules for investment in the domestic seafood industry. Any non-Russian purchase of more than 25% of a Russian company involved in the fishing, processing, storage or transportation of seafood – basically any business activity involving seafood – requires approval from a government committee. Previously, this requirement Only for fishing, while the rest of the industry – processing, storage and support services – is open to foreign investment.

Proponents of the bill argue that foreign ownership of seafood businesses could negatively impact Russia’s interests in the industry, as owners may not prioritize Russia’s food security or national interests.

The law now faces a vote in the Federal Council (the upper house of parliament), where if approved, it will face the approval or rejection of Russian President Vladimir Putin. With Putin’s party in control of parliament, most of the legislation that made the Duma a thing of the past was approved.

If it becomes law, within a year, foreign owners with more than 25 percent stake in any seafood-related company operating in Russia must obtain approval from the committee or reduce their stake to less than 25 percent. Those who do not comply a year after the law goes into effect face lawsuits from Russia’s Federal Antimonopoly Service (FAS), which could force them to relinquish any decision-making powers in the company’s operations.

The legislation represents a reversal of Russia’s previous stance on foreign ownership. In 2019, the Russian government considered Allow more foreign investment In the seafood industry, Shestakov told the 2019 Global Fisheries Forum that the country could benefit from a capital infusion.

“Why don’t we let them in, or only get approval from a government committee to let them in? There are no restrictions on foreign companies in the agricultural sector and in fish processing, so why should they engage in fishing?” he said at the time. “Will there be a threat to national security if we allow foreign companies to buy quotas to fish?”

Russia had previously tightened rules on foreign ownership of its seafood industry in 2014, Russia’s hostile annexation of Crimea international sanctions. before thisforeign investor allowed have the most 50% of a fishing company. A law passed in 2014 made this level of ownership subject to approval, and it was further strengthened in the summer of 2021, reducing foreign ownership of fishing companies to 25 percent.

Russia also imposed a blanket ban on seafood imports from several countries in 2014, and to make up for trade losses, the government launched a series of programs to strengthen the country’s domestic seafood industry.Aggressive investment quota Incentives give Russian companies additional resources if they build new fishing vessels or processing facilities in Russia.However, the required production in Russia alone has resulted in complications and delays, making the program risky.

Russia’s invasion of Ukraine has triggered a chain reaction in the global seafood market. The EU, the UK and the US have imposed sanctions, disrupting the traditional trade model of the seafood industry.

In response, Russia recently revised its fisheries strategy, which aims to enhance the country’s food security and increase food exports by achieving higher domestic growth rates, but that strategy has also been problematic.